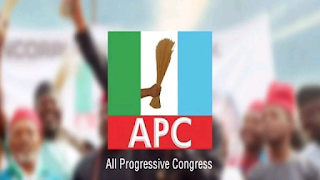 A petition letter dated 23, January 2023 obtained by PlatununPost titled “Ratification of Expulsion Order” by the state chairman of the party in the state Stephen Leo to Mr Enang ward chairman accused the former Presidential aide of anti- party activities.

According to the state chairman, the party had received a petition on 20, January 2023 demanded Mr Enang’s expulsion from the party over anti-party acitivities.

“After a free and fair gubernatorial primary election conducted by the party which he lost without showing good spirit of sportsmanship, Senator Ita Solomon Enang has engaged in endless litigation against the candidate who won and the party. In the process, fully doing the bidding of the PDP to put the clog in the wheel of our progress as a party”

According to sources in Akwa Ibom State APC, the former Presidential aide was working with the Peoples Democratic Party to scuttle the chances of the party at the polls through incessant litigation sponsored by the opposition party.

The source also said that in a free and fair election Senator Ita Enang cannot win his polling unit. It will be recalled that during the 2019 General elections he was the Director General of campaigns and could not deliver his Ward to the APC.

It is suspected within party circles that Senator Ita Enang was being bankrolled by the opposition party as every appeal to him to support the APC governorship candidate Obong Akanimo has fallen on deaf ears as he had vowed not to recognize the flag bearer of the party even after the Court of Appeal had affirmed Obong Akanimo Udofia as the authentic candidate of the party.

See the petition below: 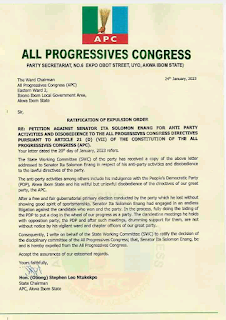