Lifestyle Nigeria gathered that Wizkid’s manager and baby mama, Jada Pollock has broken silence after the singer spoke about his relationship status.

Earlier took to his Snapchat account to state that he has been single for a very long time.

This comes amid speculations by fans that he and his 3rd baby mama, Jada Pollock are in a relationship.

Wizkid said that he intends to change the status from single to having one or two women in his life.

HE WROTE; ‘‘BEEN SINGLE FOR SO LONG. GOTTA FIND ME ONE OR TWO.”

In reaction, Jada who has two kids for Wizzy noted that she is making efforts at controlling her emotions.

The mother of two responded by saying that taking arguments to social media does not usually end well.

In a series of deleted tweets, she wrote; ”Taking arguments to social media is never going to end well. 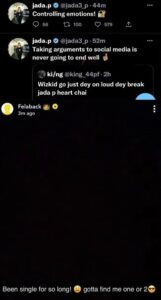