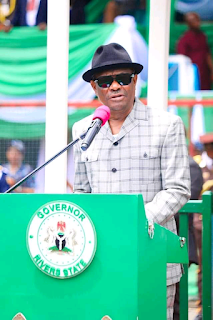 Rivers State Governor Nyesom Wike on Monday urged Rivers people not to feel intimidated by anybody in regards to this year general election.

He said they should use their votes and protect Rivers and resist any attempt from anyone that want to make them second-class citizens.

The governor also urged them to obtain their Permanent Voter Cards (PVCs).

Wike said the PVC was their power to resist those who failed in their vain attempt to use the military and the police to rig the 2019 general elections.

“Let me tell you, this election will not be like 2019 when they used soldiers and used police. It will not happen again,” he said.

The governor spoke at the Kelechi Nwogu Legacy Stadium, where the Rivers State chapter of the Peoples Democratic Party (PDP) inaugurated its campaign for Omuma Local Government Area.

He added: “Nobody should be afraid of whatever is going on in the country. We cannot be intimidated. Nobody can take this flag away from us.

“We are not second-class citizens to anybody and we must continue to stand firm and make sure our state is protected.”

The governor said in Rivers, only the PDP governorship candidate, Sir. Siminialayi Fubara, and his running mate Prof. Ngozi Odu, could consolidate on the gains of his administration.

Wike described the duo as seasoned technocrats with requisite experience in the workings of government and the capacity to continue with the state’s developmental development trajectory.

The governor recalled that when he asked Omuma people to vote for him as governor in 2015 and 2019, he made promises that had all been fulfilled in terms of project delivery.

Wike said he came back to ask for electoral support from them for Fubara.

The governor noted that it was the first time, Rivers would be blessed with two technocrats to steer the affairs of the state.

Sir Siminialayi urged Omuma people to gear up to secure what the party had already offered by using their votes to make a bold statement of support.