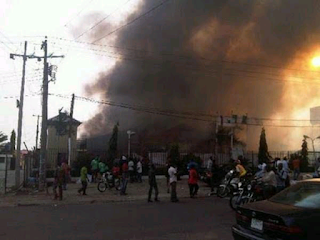 Mobile phones and other accessories worth millions of naira were on Tuesday destroyed by fire at a plaza opposite Eke Awka Market, Anambra State capital.

The fire, which started around 7.28pm, was reportedly caused by power surge.

Eyewitnesses said aside phone accessories that were destroyed in the inferno, some of the roofing sheets of the building were also affected by the fire.