A brilliant Nigerian First Class graduate of Mathematics, Emmanuel Nworie has been forced to become a cassava farmer in his village for survival. 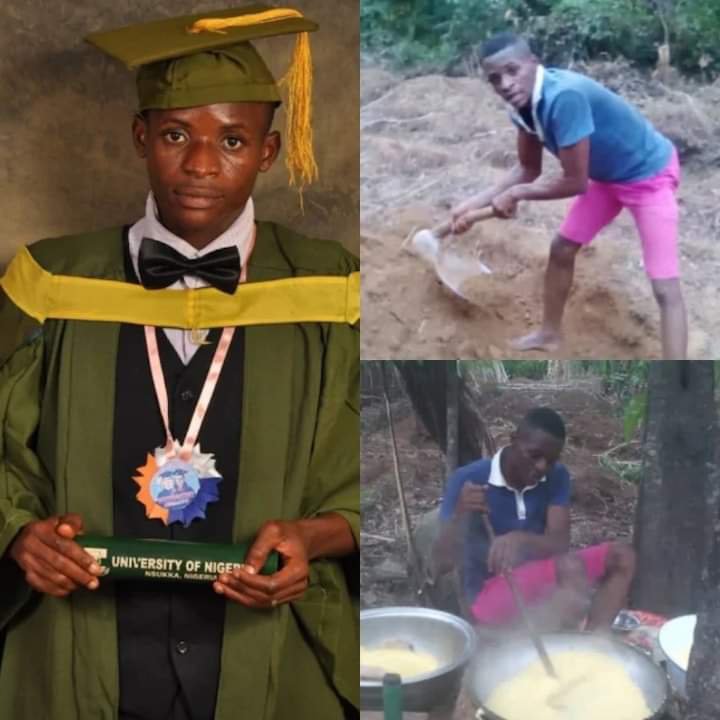 The Cable reported that the exceptionally brilliant chap who graduated with a CGPA of 4.92 on a 5-point scale from the prestigious University of Nigeria Nsukka (UNN) is now languishing on a farmland somewhere in Ebonyi state.

According to The Cable, during his one-year internship after his polytechnic studies, he took other teaching jobs and saved more money till he was able to fund his university education.

Eight years after graduating from secondary school, he gained admission to the department of mathematics, faculty of physical sciences at UNN.

In his final year, Emmanuel won the gold medal in the university category of the 2020 national mathematics competition.

After completing his one-year mandatory national youth service as a teacher in a secondary school in Enugu state, Emmanuel was retained to teach Advanced Mathematics at the school while placed on a monthly salary of $77.46 (N35,000) per month.

However, as the Covid-19 pandemic led to the shutdown of schools and businesses, the first class graduate was compelled to return to Ebonyi where he engaged in cassava planting with his mother on a piece of land his late father left for them.

After lockdown was lifted, Emmanuel returned to the city to continue with his secondary school teaching job. It was during that period that he learnt about the MT Scholarships and decided to apply.

He revealed that he lost his father to diabetes and hypertension in 2005 when he was in secondary school, which largely affected his plans of furthering his studies and applying for international scholarships.

According to the young man, it would take him up to seven years to save for US graduate application fees going by his N35k monthly salary.

Taiwo who shared the story online lamented, “And punished for what exactly? For the “crime” of being born at the wrong place at the wrong time. There was a time in Nigeria a prodigy like him would have been calling the shots, regardless of his family circumstances.
“In many other parts of the world today, he would be pushing the boundaries of science, adding to the commonwealth of knowledge, exploring what is possible, preaching the beauty of Math. But alas, he was born poor in Nigeria.”