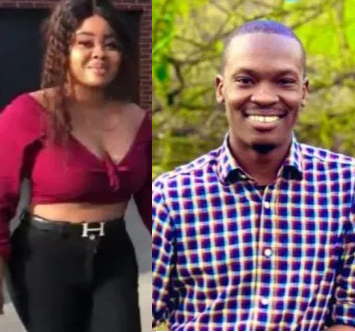 Bola Aseyan, a medical doctor who accused popular Twitter user Dr Olufunmilayo of rape, has insisted that he is guilty and she released "receipts". Dr Olufunmilayo had released a rebuttal after Dr Bola Aseyan accused him of rape. In his statement, he said he had consensual sex with Dr Bola twice after they met on Twitter in 2020.  Narrating how the sex happened, Olufunmilyo said he and Dr Bola met in person after her visa application came through and she moved to the UK. He said they drank red wine and later had sex. Olufunmilayo said Bola later sent him a voice note saying she did not give consent to the sex and demanded an "apology" which Dr Olufunmilayo said felt awkward because "they both took alcohol and sex happened". But Bola is stating that this isn't the case. She alleging that he raped her without a condom. She explained that she was in the sitting room watching TV with Dr James, who is Dr Olufunmilayo's roommate, when he sent her a text asking her to come to his room and bring the alcohol along. She said that after drinking the alcohol, she "passed out" and woke up to see that sex had happened. She said this makes her suspect that he "spiked" the drink. She also released screenshots of an alleged chat allegedly between her and Dr Olufunmilyo's best friend where she said he was begging her not to tell anyone about what had happened. She questioned why he will be begging on his friend's behalf if he didn't do anything. She captioned it: "Conversations with Funmilayo’s Best Friend and His Witness as stated in his rebuttal. Dr Owolabi called and pleaded with me not to tell anyone. This is the same man who has always advocated for Funmi." To dispute Dr Olufunmilayo's claim that she was trying to get pregnant for him on purpose, she released screenshots showing that she discussed getting contraceptives with Olufunmilayo after the alleged rape and he directed her to a pharmacist and promised to pay. Read some of her tweets and "receipts" below. 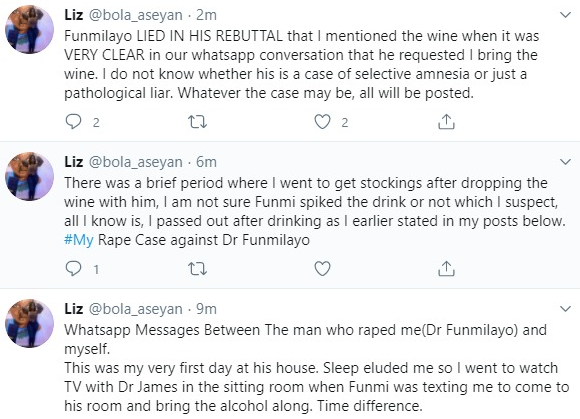 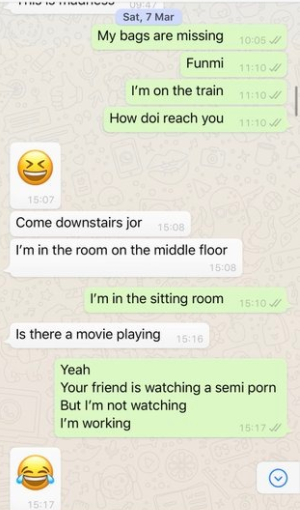 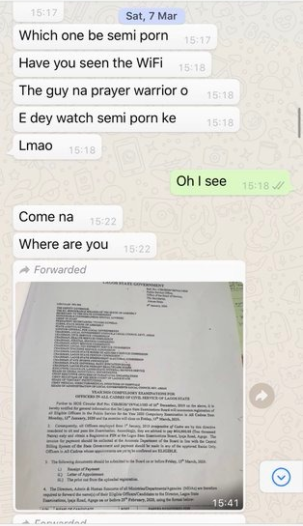 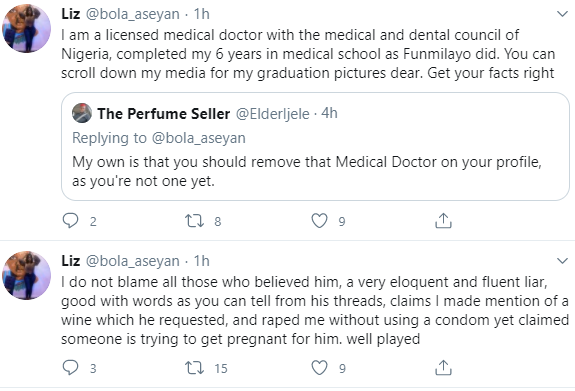 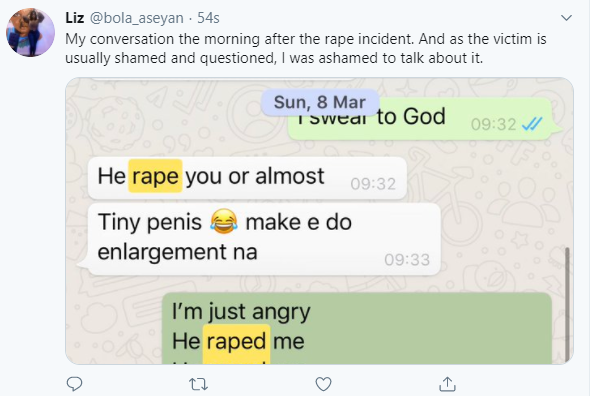 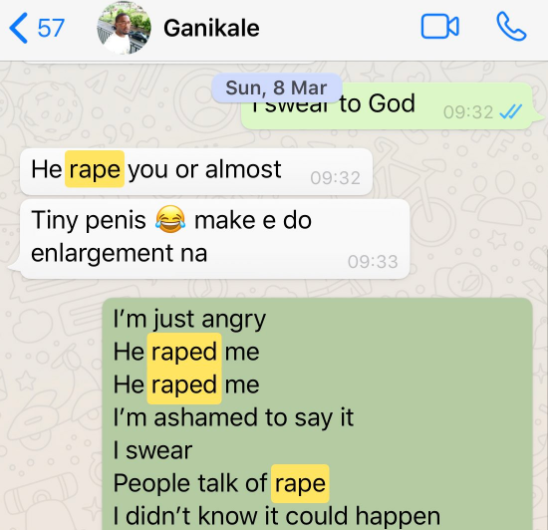 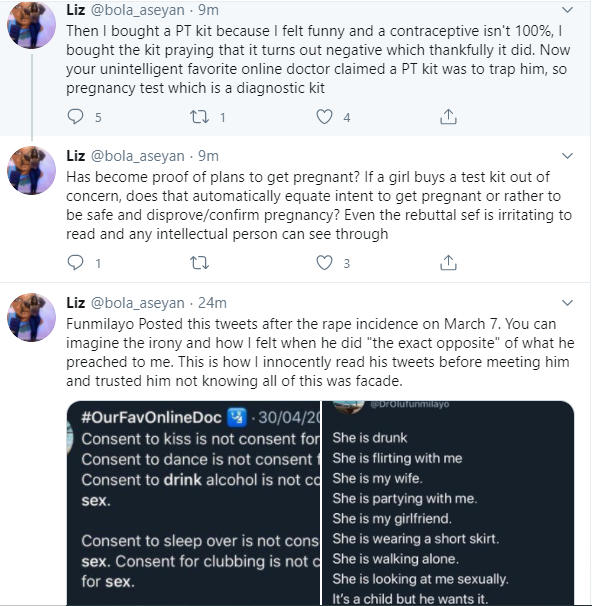 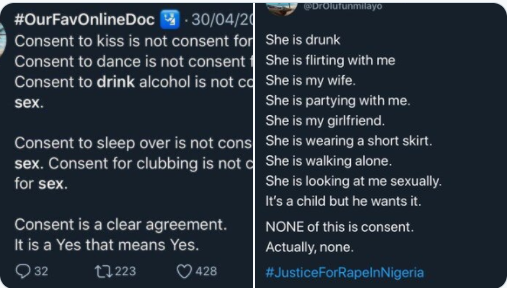 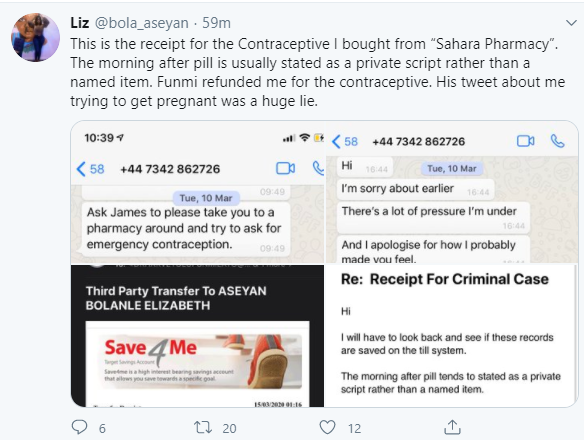 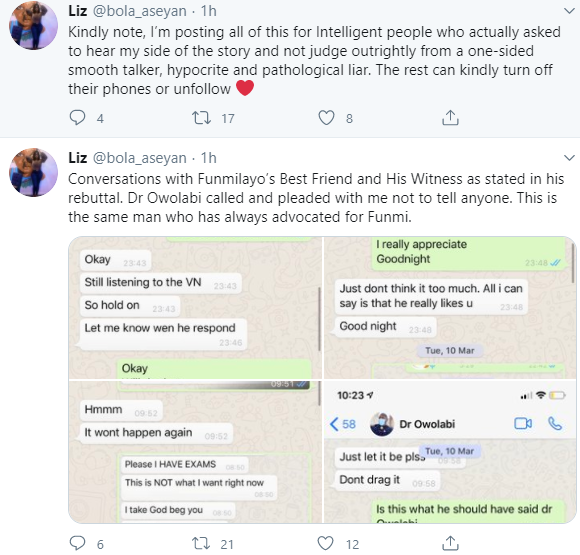 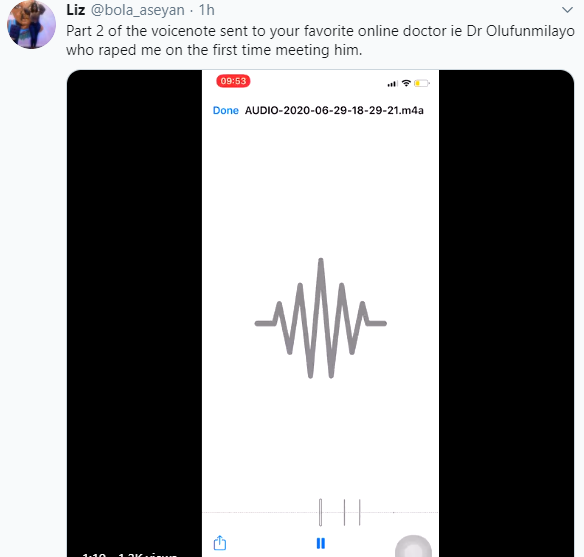 EndSARS! Sanwo Olu Blame Buhari, Nigeria Army & Tinubu For Lekki Tollgate | Falz
‘She Is Smiling From Heaven, Stay Strong God Is With You’
To Top
X