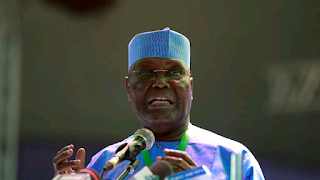 Wife of the presidential candidate of the Peoples Democratic Party (PDP), Mrs Titi Atiku Abubakar, has asked Nigerian women to hold her responsible if her husband, Atiku Abubakar fails to fulfill his campaign promises when elected as president.

She also promised that Atiku would not marginalise the South West, saying “a vote for Atiku is a vote for the Yoruba.”

She stated this at a town hall meeting with Ogun women in Abeokuta, the state capital.

Mrs Atiku noted that if her husband is voted in, she would become the first Yoruba First Lady, urging the Southwest to give maximum support to her husband in the February 25 election.

She also vowed that her husband would end poverty and insecurity.

Also speaking, PDP National Woman Leader, Prof. Stella Effah-Attoe, urged the women not to keep their PVCs inside the wardrobe after collection but to ensure they go out en masse and vote PDP candidates.

The wife of the PDP governorship candidate in the state, Adenike Adebutu, commended Mrs Abubakar for always fighting the course of Nigerian women and children.