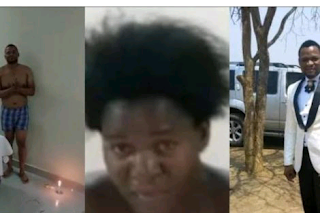 A man has caught his heavily pregnant wife having sxxxx with a pastor on his matrimonial b*d. Not only did he catch them red handed, they were surrounded by fetish items.

The woman, simply identified as Martha, had told her husband she was visiting her family in Kitwe in Zambia. The man who had left the house, changed his mind, returned and found his wife having sxxxx with the pastor.

A Update, recorded by the husband that has gone viral, shows the husband telling this wife not to move, that he would kill her.

The wife, still [email protected], tried to beg her husband, while the pastor looking like a bedraggled chicken stranded in the rain, immediately put on his shorts to cover his [email protected]

The scene was dramatic as the said pastor, in order to scare off the shadow of Martha’s husband or make the room romantic had decorated the room with candles, flowers and other items that were on the floor.