Temmie Ovwasa, a Nigerian singer better known as YBNL Princess, has shared her thoughts about God and religion via a question and answer session she had on Instagram.

The singer who was asked if she’s an atheist, stated that she doesn’t think ‘God’ doesn’t exist. She went on to declare herself a “God” while stating that the human mind is too small to comprehend a lot of things.

Temmie said she doesn’t think ‘God’ doesn’t exist replying to a question a fan asked whether she was an atheist. She disclosed further calling herself a God owing to the fact that the human mind can’t understand a lot of things because it’s small.

See her reply below 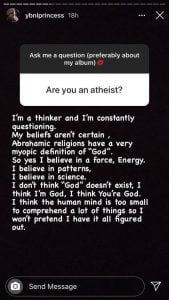