Popular Nollywood actress, Ireti Doyle has replied a journalist who slammed her for dissociating herself from her daughter, Kachi’s business dealings over scam allegations.

Ngozikachi Abimbola Onyeulo, the Chief Executive Officer of Kachi Beauty, has been called out repeatedly for swindling people of their hard-earned money.

According to reports, she started a wholesale distribution business and collected money from unsuspecting buyers but failed to supply the products.

Ireti Doyle was also dragged into the case for promoting her daughter’s business on her social media page, thus causing people to trust her with their money.

In reaction to the backlash, the thespian released a statement to distance herself from her daughter’s business. According to her, Kachi is just “one of her biological offsprings and that is the extent of the relationship.”

However, Nigerian journalist, Fisayo Soyombo, took to Twitter to criticize her for her actions.

He tweeted, “After repeatedly promoting her daughter’s hair business on Instagram in the past, Ireti Doyle cannot suddenly extricate herself from it now that it has turned out a scam.

Integrity-wise, the thing to do is work with your daughter to ensure the refund of the many people who paid her in the first place simply because they trusted you.”

In response, Ireti questioned if he, as an adult, always listens and obeys his mother’s instructions to the letter.

She wrote, “Hi Fisayo… respectfully I’d like to ask; as an adult with autonomy and full agency over yr personal affairs, is it everything your mom asks/tells you to do that you comply with expressly and to the letter? No…? I’ll leave it there for now. Blessings!” 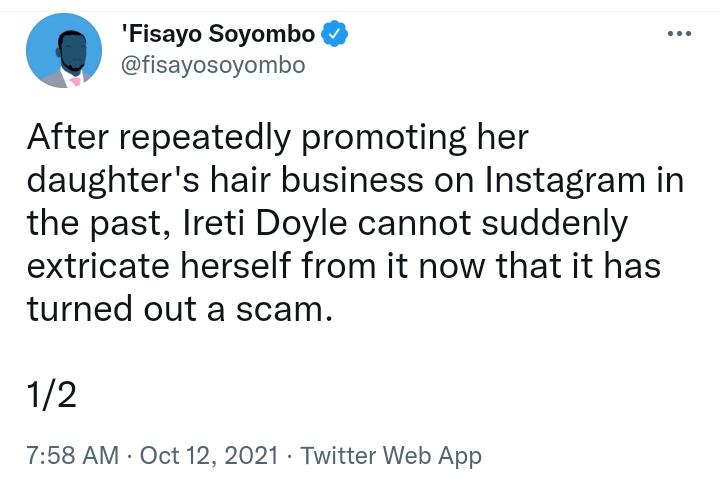 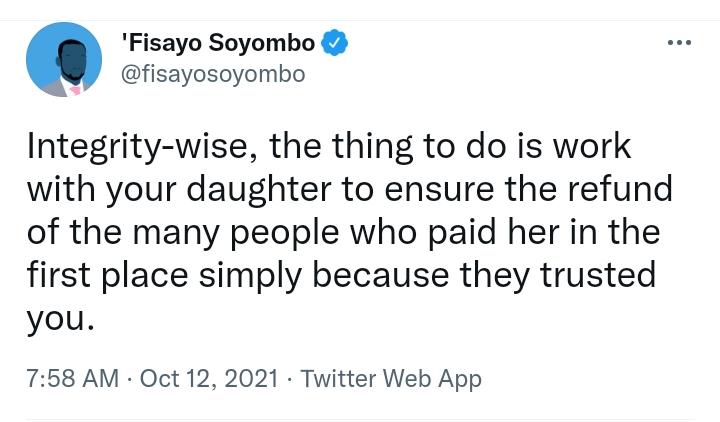 Get the best viral stories straight into your inbox!

What do you think?

Don’t miss out on new posts

© 2021 by bring the pixel. Remember to change this

Your password reset link appears to be invalid or expired.

To use social login you have to agree with the storage and handling of your data by this website. %privacy_policy%

Hey Friend! Before You Go…

Get the best viral stories straight into your inbox before everyone else!

Don't miss out on new posts!