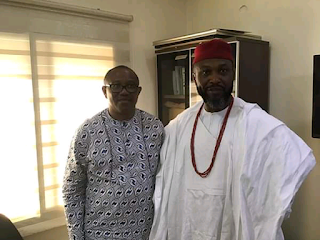 A chieftain of the Peoples Democratic Party (PDP) Osita Chidoka says the South-East should back the party in the 2023 elections.

While observers believe Labour Party’s Peter Obi who is from the region will disrupt PDP’s dominance in the South-East, the former Aviation Minister said it would be unwise for Igbos to leave the party they have supported since 1999.

He believes that while the advocates of an Igbo presidency outside the PDP are not wrong, the main opposition party is the shortest cut for the South-East to clinch the country’s top seat.

Conceding that Peter Obi has made significant progress in wooing Nigerians, he maintains that is not enough. According to him, the South-East must move a step closer to make the presidential dream a reality.

“The Igbo presidency is just around the corner. Once an Igbo man is capable of holding on strong in a party and controlling the levers of that party, that is going to happen soon,” the PDP chieftain added.

On the presidential election, Chidoka argued that the PDP is poised to win the exercise, citing the party’s organisational structure and its candidate’s experience and resilience.

“Atiku Abubakar has won the election. It is just a matter of time. When we get to February 25th, the country will say it,” he said.

Atiku, he adds, is capable of mopping up votes across the country. Despite the inter wranglings in the PDP, Chidoka says that won’t affect its candidate’s chances.

The ruling All Progressives Congress (APC) has not done well for the country and thus won’t win votes in many parts of Nigeria, he says.

“They have significantly degraded the capacity of Nigeria as a nation. They have degraded our unity in diversity and our economy,” Chidoka said.