Lifestyle Nigeria gathered that Bishops and other religious leaders from both Christian and Muslim sects and supporters of the All Progressives Congress, APC, Presidential candidate, Bola Tinubu, and Vice, Shettima, in the early hours on Saturday, stormed the campaign rally at Teslim Balogun Stadium, Surulere, Lagos State, numbering millions in fanfare atmosphere.

Others are: Former Minister for Health, State and now Minister for Science and Technology, as well as former Speaker Lagos House of Assembly, Senator Olorunimbe Mamora.
Leaders of Nollywood in the entertainment sector, led by Yonka Qiadri, Saheed Balogun and Taiwo Hassan, popularly called Ogogo, Bimbo Daramola, among others are on ground.

The entire area was packed with crowd and supporters clad in different colours and brooms of the party symbol, chanting solidarity songs fur Tinubu and APC in the early hours of the day

Armed security personnel and first aid as well as emergency responders, were stationed at different strategic points to ensure adequate protection of lives and property.

The Director General, DG, of the Local Organising Committee for the Presidential Campaign in Lagos State Campaign Council, Senator Ganiyu Solomon, earlier at a media briefing said the rally will be a homecoming for the former Lagos State Governor and the national leader of the party.

Solomon said the event holds a promise for mass attendance by members of the APC and members of the general public because of the popularity of the party Presidential Candidate, Tinubu, whom he said has remained the most consistent, biggest contributor and the most visible democratic icon since the advent of democratic dispensation in 1999.

As at 12 noon, the much expected Presidential Candidate and his vice are yet to get to the venue as they were locked down in the crowd and attendant traffic gridlock. 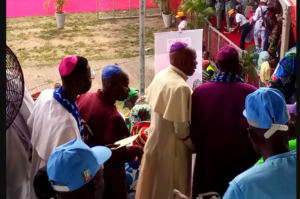