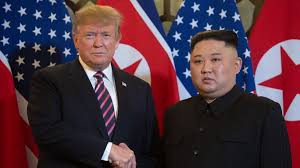 Kim Jong Un displayed the headless body of his executed uncle to senior North Korean officials, according to the US President Donald Trump. Jang Song Thaek, the North Korean leader’s uncle and a hugely powerful figure within the regime, was killed in 2013 for committing 'treason' and corruption in 2013."Kim tells me everything. Told me everything,” Trump told the Washington Post journalist Bob Woodward, according to his forthcoming book “Rage”.“He killed his uncle and he put the body right in the steps,” Trump said, in an apparent reference to a building used by senior officials.“And the head was cut, sitting on the chest,” he added in excerpts from the book seen by AFP. Trump’s account of Jang's death shows the close nature of his relationship with the North Korean dictator, even though the hermit nation has never admitted how he was killed. Nuclear negotiations between Pyongyang and Washington have stalled since the collapse of the Hanoi summit last year when Trump and Kim failed to reach an agreement . Pyongyang officials said they had offered to “dismantle all the nuclear production facilities in the Yongbyon area”, but according to the book Trump demanded five sites be given up.“Listen, one doesn’t help and two doesn’t help and three doesn’t help and four doesn’t help. Five does help,” Trump reportedly told Kim according to the book. Yongbyon was the North’s biggest site, Kim countered “It’s also your oldest,” Trump retorted. Kim, though, would not offer further concessions, and Trump told him: “You’re not ready to make a deal.”“I’ve got to leave,” he added, to Kim’s shock. ‘I am really, very offended’. Kim Jong-Un showed off executed uncles headless body: Trump Follow Linda Ikeji Blog.

BBNaija: Most of the female housemates are fortified with Kayamata
Kodak Black Is Suing The Federal Bureau For Torturing Him Behind Bars.
To Top
X