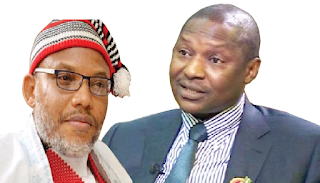 The Attorney-General of the Federation (AGF) and Minister of Justice, Abubakar Malami, has reacted to Anambra State governor, Charles Soludo’s request to stand as surety for Nnamdi Kanu, leader of the Indigenous People of Biafra (IPOB).

Mr Kanu has been leading a separatist campaign for an independent state of Biafra.

According to Mr Kanu, the Biafran Republic would comprise people of Igbo-speaking origin from Nigeria’s South-east and some parts of South-south states.

The IPOB leader was first arrested by Nigeria’s spy agency in 2015 in Lagos, South-west Nigeria.

Mr Kanu’s trial on terrorism and treasonable charges has been dismissed by the Court of Appeal in Abuja.

The appellate court on13 October held that Mr Kanu’s extraordinary rendition to Nigeria from Kenya last June was a flagrant violation of Nigeria’s extradition treaty and also a breach of his fundamental human rights. The government’s action, the court said, invalidated the trial.

The court ordered his release from the custody of the Nigerian secret police, State Security Service (SSS).

But Mr Kanu remains in detention while the federal government pursues its appeal at the Supreme Court in an effort to have the charges against him restored.

There have, however, been calls from different quarters for the IPOB leader’s release.

Governor Soludo joined the list of those calling for Mr Kanu’s release during the presidential campaign flag-off of the All Progressives Grand Alliance (APGA) in Awka, Anambra State on 15 January.

Mr Soludo said if Mr Kanu cannot be released unconditionally by the Nigerian government, the IPOB leader should be released to him.

In an exclusive interview with PREMIUM TIMES on Wednesday, the Attorney-General said he was not in receipt of Mr Soludo’s request.

“There is no such request formally before the federal government or the judicial process.

“As at today, being 18 January 2023, I am not in receipt of any application arising from the public statement made by the governor of Anambra State (Chukwuma Soludo), either through the judicial process or extended to me as the Attorney General of the Federation (AGF),” Malami said.

Mr Malami, a Senior Advocate of Nigeria (SAN), explained that “when a matter is pending before the court, the right channel through which any request or perhaps concession can be presented for consideration is through the judicial process.”

He added that the renewed call for Mr Kanu’s release “has not been invoked formally for the consideration of the Attorney-General.”

Mr Kanu was facing terrorism charges before Binta Nyako of the Federal High Court in Abuja and was granted bail in 2017.

But the Nigerian Army on 14 September 2017 invaded the IPOB leader’s Afara-Ukwu home near Umuahia, Abia State during which 18 civilians were killed, Mike Ozekhome, Mr Kanu’s lawyer, said during a court session.

Due to the invasion, Mr Kanu fled the country prompting Mrs Nyako, the trial judge, to issue a warrant of arrest for the IPOB leader.

One of Mr Kanu’s lawyers, Alloy Ejimakor, described the IPOB leader’s escape during the invasion as the “rule of self-preservation.”

But Mrs Nyako revoked Mr Kanu’s bail for abandoning his trial, and ordered his trial to be separated from the rest of the co-defendants’.

While the trial of the rest of the defendants has made some progress, Mr Kanu’s has been stalled since 2017.

After nearly four years abroad, on 29 June 2021, Mr Malami in the company with the Inspector-General of Police, Usman Baba and SSS officials announced Mr Kanu’s arrest and repatriation from Kenya to Nigeria.

He was subsequently re-arraigned before Mrs Nyako on 15-count terrorism and treasonable felony charges, but the judge, in April 2021, struck out eight of the charges after the IPOB leader challenged their validity.

The separatist leader went on to the Court of Appeal seeking to quash the remaining seven counts.

In a unanimous judgement last October, the Court of Appeal panel held that the Nigerian government breached local and international laws in the forcible rendition of Mr Kanu to Nigeria.

It said the IPOB leader’s illegal repatriation to Nigeria renders the terrorism charges against him incompetent and unlawful.

Mr Kanu who was brought back to Nigeria last year is being held by SSS in its facility in Abuja, Nigeria’s capital.

Nigeria’s Supreme Court has yet to fix a date for the hearing of the federal government’s appeal challenging the Court of Appeal decision ordering the IPOB leader’s release.