Kylian Mbappe’s brace against Denmark has sealed France’s top spot in the Group D of the Qatar 2022 World Cup.

Lifestyle Nigeria reports that the Saturday victory has therefore made France the first team to qualify for the last 16 of the ongoing World Cup.

Kylian Mbappe – fresh from scoring in France’s opening night 4-1 win over Australia – scored the first of his two poacher-like efforts when converting a cross from Theo Hernandez on 61 minutes.

Meanwhile, Argentina have taken out their humiliating opening defeat by Saudi Arabia on Mexico.

Messi scored the crucial opening goal from 20 yards in the 64th minute. Fernandez on the other hand, curled in the first goal for his country in the 87th minute to secure the second goal and three points.

On the other hand, luck was against Saudi Arabia as Poland defeated them 2-0 on Saturday.

Barcelona star, Robert Lewandowski fulfilled his childhood dream by scoring his first World Cup goal as he netted Poland’s second at the 82nd minute just four days after he missed a crucial penalty in his team’s opening goalless draw against Mexico. 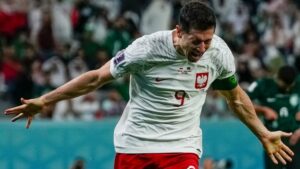