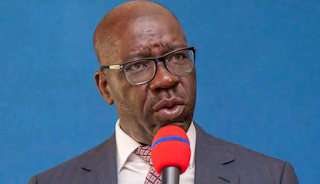 As Governors of the South-South battle to defend how they expended billions of Naira accrued to them from the 13 per cent derivation funds over the years, Edo State governor, Godwin Obaseki, on Wednesday, said his State has so far received a total of N2.1 billion paid in three tranches of N700m each.

The governor’s explanation comes on the heels of a public challenge by a fellow Niger Delta governor, Nysom Wike of Rivers State, who openly challenged his colleagues in the South-South to account for the 13 per cent derivation funds received by them over the years, saying it was the same money he used in executing mega projects in Rivers State.

Speaking for Governor Obaseki, the State’s Commissioner for Information and Orientation, Chris Nehikhare, in company of the Commissioner for Budget and Planning, said the Edo State has so far received three tranches of the 13 per cent derivation fund since the commencement of the release of the money.

The State in it usual way of diverting attention and cover up took a swipe at the immediate-past Governor Adams Oshiomhole, accusing of him of playing up a debt of N160billion after having received N1trillion during his eight years in office.

Nehikhare said, “By the time Oshiomhole left office, eight years later after receiving N1trillion from the Federation Account, Edo owed N160b. Under normal circumstances, Oshiomhole doesn’t have the moral authority to talk about transparency or accountability.

According to him, “Obaseki government is the most frugal and transparent government the state has produced in the last 25 -30 years. We will wait and respond to Oshiomhole at the appropriate time. Thank God he is standing for an election and we will call him out to answer to the Edo people.”

According to fact-check by Infopowerng, Obaseki lied as usual and has failed in deceiving the people as record shows that as at 29th march 2017 (Nigeria Observer News Paper), Edo State has the lowest cumulative debt (both foreign and domestic) of N94 billion.

The above figure shows that edo state debt profile has risen significantly under Governor Obaseki’s “regime”, yet blaming his former godfather who made him governor.

For his part, the Commissioner for Budget and Planning, Hon. Joseph Eboigbe, while shedding more light on the 13 per cent derivation fund, disclosed that Edo State’s share of the money is N28billion.

He claimed that “A total of about one trillion naira was established as due to be refunded to oil producing states. Now, it went through the whole process and it was approved.

“Edo State’s share of that figure was N28billion. What was also approved was the way and manner this money was to be distributed to the State, the net amount will come to the State over five years.

“By the time they started the releases, Edo State got two tranches of N700m per quarter, so what we have received so far is three tranches which is verifiable and that is what has come into the State’s coffers, this can be checked from the Accountant-General of the State and the banks and how that money was spent have records,” Eboigbe stated.

The question is; when will Governor Obaseki stop blaming Ex-Governor Oshiomhole for his failure?