“Ologbondiyan was the former National Publicity Secretary of the PDP (Dec. 2017-Dec. 2021). He was the Director of Media and Publicity, PDP Presidential Campaign Council (2019 Presidential Election) and is now a member of the National Executive Committee of the party.

He added that the former spokesperson was Special Adviser (Media and Publicity) to the former President of the Senate, Senator David Mark (2007-2015). He is a highly experienced journalist endowed with the requisite skills of communication. 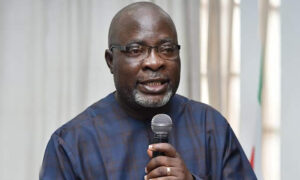