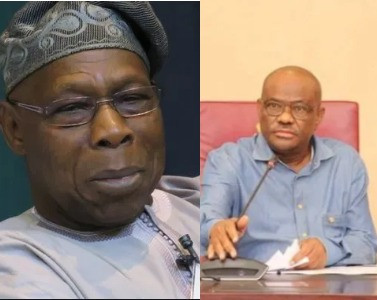 The Muslim Lawyers Association of Nigeria has asked the leadership of the Nigerian Bar Association to remove ex-President Olusegun Obasanjo and Rivers State Governor, Nyesom Wike, as speakers at the forthcoming Annual General Conference of the NBA scheduled for August 26 to 29. This is coming on the heels of the leaderships decision to disinvite Kaduna state governor, Nasir El-Rufai from the AGM after some lawyers demanded he be disinvited. The lawyers argue that Governor El-Rufai has been overtime accused of human rights abuses. The NBA leadership bowed to the pressure from the lawyers and disinvited the governor. Read here. This has however been met with stiff opposition. Members of the Jigawa state chapter and the Bauchi state chapter have threatened to boycott the AGM if the decision to disinvite the governor is not reversed. In an interview with Punch on Saturday, August 22, the president of the Muslim Lawyers’ Association of Nigeria, Ibrahim Abikan, said his association has objected to having Obasanjo and Wike as speakers at the conference because they are allegedly guilty of the same allegations filed against Governor el-Rufai. “We insist that if any standard is set for withdrawing el-Rufai, the same should apply to other speakers too. El-Rufai is a public officer and any other person who has the same record of allegations of human rights abuses should also be disqualified. We expect that the same standard should apply to Obasanjo and Wike.People have started forwarding petitions to me of allegations of human rights abuses and disrespect for the rule of law against Obasanjo and Wike. They have started forwarding it to NBA Conference Planning Committee and the NBA as a body.Our position is that whoever is going to be speaker should be able to give us quality presentation.” Abikan  said The immediate past president of MULAN, Funminiyi Adeleke, in a separate interview, also condemned the decision of the association's leadership to disinvite Governor el-Rufai. He argued that Obasanjo and Wike do not have the pedigree to be speakers at the AGM. “We looked at the parameters upon which el-Rufai was dis-invited. Other speakers on that platform are equally guilty. For instance, Obasanjo is one of the worst abusers of human rights in Nigeria. We know what happened at various times when he was in the military and when he came back as a civilian leader.He doesn’t have the pedigree to be a speaker.What of Wike? Wike is the first governor to declare his state as a Christian state, which is an affront to Section 10 of the Nigerian Constitution which states that no state shall adopt a religion as the state religion.But even when confronted, Wike continues to say that Rivers is a Christian state. He has committed a lot of atrocities – he destroyed mosques, hotels, he did a lot of things and we have a catalogue on them.Our position is that the NBA should drop Obasanjo and Wike and get any other person because if you dis-invited el-Rufai for disregard for the rule of law, the two other speakers on the platform are equally guilty.” Adeleke said  Other speakers at the conference with the theme, ‘Step Forward’, include Vice-President Yemi Osibanjo; House of Representatives Speaker, Femi Gbajabiamila; Chief Justice of Nigeria, Tanko Muhammad; Attorney General and Minister of Justice, Abubakar Malami.. Remove Obasanjo and Wike as speakers at our conference- Muslim lawyers tell NBA leadership Follow Linda Ikeji Blog.

How Flavour, Phyno Allegedly Took N78m from Ekweremmadu For EndSars Protest
End Sars: What is happening in Nigeria?
To Top
X