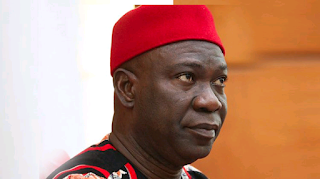 The Minority Caucus of the House of Representatives, on Sunday, applauded the judgment of a Federal High Court, Abuja, which vacated the court’s earlier interim assets forfeiture order on 40 properties allegedly linked to former deputy president of the Senate, Senator Ike Ekweremadu.

It will be recalled that the court had described facts leading to the continued detention of the former deputy Senate president, Senator Ike Ekweremadu, as pathetic and heart-rending.

The caucus, in a statement signed by the minority leader of the House, Ndudi Elumelu, yesterday, also commended the Judiciary for its courage in reinforcing the tenets of fairness and even-handedness in the pursuit of justice, as demonstrated in the judgment.

The caucus expressed optimism that justice would be duly served on Ekweremadu’s case.

“As lawmakers, our caucus further holds that the Federal High Court has, by this judgement, further strengthened the confidence and trust of the citizens in the Judiciary as the last hope of the common man, particularly in a democratic setting.

”The caucus strongly hopes and believes that in all, justice will prevail at the end of the day in Ekweremadu’s matter,” the statement read.

It will be recalled that Justice Inyang Ekwo, while vacating the interim order that allowed the Federal Government to seize 40 properties that were linked to the embattled lawmaker, berated the Economic and Financial Crimes Commission, EFCC, for the role it played in the senator’s continued detention, saying no Nigerian should be made to pass through such travail, whether at home or abroad.

Ekweremadu, who is currently facing trial in the United Kingdom, UK, over an allegation that he brought one David Ukpo into the country for the purpose of harvesting his organ had, in processes he filed before the court through his lawyers, accused the EFCC of being responsible for his continued detention.

He bemoaned that he would have been released on bail, if not for a letter he said was forwarded to the London Court by the anti-graft agency.

He begged the court to either set aside the interim forfeiture order or suspend further proceedings in the matter until he is able to appear to show cause why his properties should not be confiscated.

While stressing that the properties in question have been the subject of an investigation that started since 2008, Ekweremadu argued that EFCC was aware that he was detained in the UK, before it moved to seize his assets.