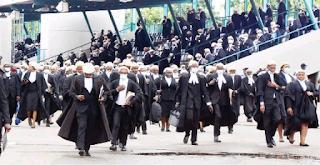 Two senior lawyers, Kayinsola Ajayi and Etigwa Uwa, on Monday, staged a walkout on a judge of the Federal High Court in Abuja in the middle of a hearing over the alleged unlawful removal of Ifeanyi Ararume as NNPC Limited’s non-executive chair early last year.

The protesting lawyers, both Senior Advocates of Nigeria (SANs), had appeared in court to represent the Nigerian National Petroleum Company Limited (NNPC Limited).

Unperturbed by the development, the judge, Inyang Ekwo, ensured the hearing continued after the lawyers’ walkout on Monday.

Other lawyers in the case adopted their final addresses, and the judge went on to fix 28 March for judgement at the end of the hearing.

Mr Ararume had sued President Muhammadu Buhari along with NNPC Limited last year, praying the court to declare his sacking as the non-executive chair of the company as “illegal, unlawful and unconstitutional.”

At the resumed hearing on Monday, Mr Kayinsola, a law professor, who led a team of lawyers on behalf of the NNPC Limited, sought to argue an application urging the court to halt proceedings pending an appeal against its 11 January ruling.

Mr Kayinsola contended that his application seeking a stay of proceedings must be heard separately and the ruling delivered by the judge before any other application should be heard.

Trouble started when the judge asked Mr Kayinsola to move the application along with two others he had pending in court.

Mr Ekwo, reputed for his astute management of judicial time, said he would deliver separate rulings on each of the requests at a later time.

But Mr Kanyinsola insisted on moving the application for a stay of proceedings against the judge’s directive even after Mr Ararume’s lawyer, Chris Uche (SAN), said the application had yet to be served on him.

But the judge stuck to his gun and ordered the lawyer to proceed with the hearing as he ordered.

Immediately Mr Ekwo ordered the NNPC lawyer to move his three applications, Messrs Kayinsola and Uwa announced their withdrawal from the case, staging a walkout on the court.

He urged the court to invoke the Companies and Allied Matters Act (CAMA) to void Mr Araraume’s removal as the Chairman of the NNPC Limited.

The plaintiff’s lawyer informed Mr Ekwo that Mr Buhari breached the law by removing Mr Ararume after incorporating the oil company in his name and was billed for inauguration in the capacity.

But Mr Buhari’s lawyer, Abubakar Shuaib, asked the court to dismiss the suit for being statute-barred.

In his argument, Mr Shuaib said Mr Ararume’s suit offended Section 2(a) of the Public Officers Act and as such was “incompetent.”

Also, Akeem Mustapha (SAN), representing the Corporate Affairs Commission (CAC) which is also sued as a defendant in the suit, urged the court to decline jurisdiction over the suit.

He argued that the CAC had no hand in Mr Ararume’s sacking, adding it only incorporated NNPCL as a limited liability company based on the document submitted to it.

After listening to the lawyers’ arguments, the judge slated 28 March for judgement.

Mr Ararume sued the president, praying the court to declare his sack as NNPC board chairman “illegal, unlawful and unconstitutional.”

He contended that his removal by Mr Buhari vide letter of 17 January 2022 with reference number SGF.3V111/86 was a violation of the CAMA law under which NNPCL was incorporated.

The plaintiff urged the court to order his reinstatement to office.

Also, Mr Ararume demanded N100 billion as the damages he suffered as a result of his “unlawful” removal from office.

He also sought an order of the court reinstating him forthwith and restoring him to the office with all the appurtenant rights and privileges of the office of the NNPC non-executive chairman.