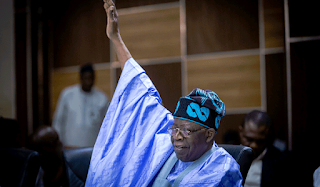 The presidential candidate of the All Progressives Congress (APC), Bola Tinubu, has donated N20 million to the Catholic Church in Benue State.

Mr Tinubu’s donation was presented by Hyacinth Alia, a reverend father and APC governorship candidate in the state, at the centenary anniversary of the Catholic Diocese of Otukpo.

This is contained in a statement by Isaac Uzaan, media aide to Mr Alia, on Thursday in Abuja.

Mr Tinubu, a Muslim from the South-west, recently came under criticism from the Christian community in Nigeria for picking another Muslim, former Borno State governor Kasim Shettima as running mate.

The umbrella body of Christians in Nigeria, the Christian Association of Nigeria (CAN), condemned the same faith ticket.

Some Christian members of the APC, mainly from the North, rejected it and vowed not to work for the party. They said there are Christians in the North qualified to run with Mr Tinubu in the presidential election.

At the centenary anniversary held at the Cathedral Church of St. Francis Otukpo, Mr Tinubu rejoiced with the priests, religious, laity, and the entire members of the diocese on the joyous occasion.

He noted that the church had for 100 years remained committed to spreading the good news of salvation in Nigeria, particularly to the people of Benue South.

The APC presidential candidate expressed optimism that with prayers and positive actions, the country would overcome its challenges.

Mr Akume, who is the APC leader in Benue, was represented by the party’s state chairman, Austin Agada.

He urged the people of Benue to be steadfast in prayers for the state and Nigeria to overcome current challenges.

On his part, Mr Alia expressed concern over the level of poverty the people of Benue have been exposed to.

He said that the state government should fulfill its salary obligations to civil servants and address challenges of insecurity, poor infrastructure and unemployment.

Mr Alia pledged to change the situation if elected governor in 2023, and called on the entire people of Benue South to support him to succeed.

Michael Apochi, the bishop of Otukpo Diocese, thanked all those who facilitated the donations, and prayed for Nigeria to be better and stronger.

Mr Apochi said the Otukpo diocese had come this far only through prayers by clergies and the laity.