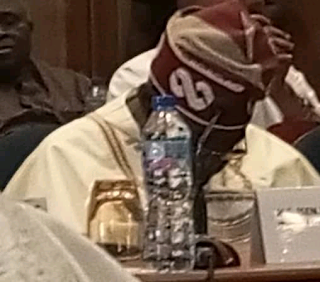 Presidential Candidate of the African Action Congress (AAC), Omoyele Sowore, has lashed out at the behaviour exhibited by Bola Tinubu during a meeting of presidential candidates on Friday in Abuja.

The firebrand Sowore, who took to his social media page after the meeting organised National Peace Committee, said the presidential candidate of the ruling All Progressives Congress (APC) was busy sleeping all through and failed to make any contribution.

“We just returned from a meeting of party leaders/Presidential candidates with the national peace committee in Abuja, the Presidential candidate of The ⁦@OfficialAPCNg⁩ ⁦@officialABAT⁩ slept through the meeting, he didn’t say a word. His party chair spoke on his behalf,” Sowore tweeted.

“I was asked by Chair of the National Peace Committee, General Abubakar Abdusalam to “reconcile” with Major Hamza Mustapha. I was very clear that my disagreement was political, that I have issues with all the military people that annulled the June 12, 1993 elections including him!”

PlatinumPost reports that Tinubu and Sowore were among those who attended the meeting that the National Peace Committee under the leadership of Gen Abdulsalami Abubakar (rtd) organised in Abuja on Friday.

According to Abdulsalami, the meeting was organised to ensure proper conduct of the candidates, their parties and other stakeholders, especially during the campaigns ahead of the elections.