The conspicuous appearance and attendance of the members of The Osun Progressives (TOP) at the inauguration ceremony of Senator Ademola Adeleke has vindicated the leadership of the All Progressives Congress (APC) in the State that they (TOP) clandestinely worked against the victory of the party in the last governorship election in the State.

Recall that TOP members had in the past constituted nuisance and become a clog in the wheel of progress of the party–as an intra-APC opposition group frustrating the efforts of the party since its emergence.

The TOP members had in several occasions boasted to unseat the immediate past Governor of the State, Adegboyega Oyetola who they worked against to ensure victory for Adeleke.

But the TOP members, through their Patron, Rauf Aregbesola who is the former Governor of the State and current Minister of Interior, had dispelled the claims of hobnobbing with the opposition-PDP, a claim which had been busted by the leadership of the APC and vindicated by the attendance of Aregbesola’s stooges at the inauguration ceremony.

The immediate past State Chairman of the APC, Prince Gboyega Famodun now Owa of Igbajo, had described TOP members and their sponsors as parasites who were hellbent to pull down the party for selfish interest.

Salinsile who has been parading himself as the APC State Chairman led the die-hard loyalists of Aregbesola to the event, a clear indication that Aregbesola was a contributing factor to the ill-fated outcome of the July 16 governorship election in the State.

The self-aclaimed factional Chairman of the APC was spotted at the event exchanging pleasantries with the PDP leaders while other TOP members conspicuously sighted fraternizing with members of the PDP.

The members of the splinter group had shown clearly to the whole world that their actions and inactions were aimed to destroy the APC for their myopic interest and this has once again justified the treacherous claims of the APC’s leaders against TOP members and their Patron. 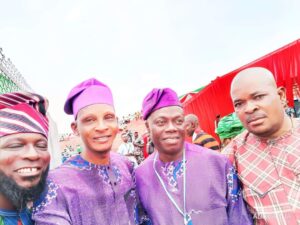 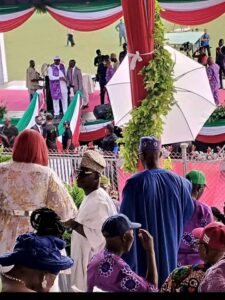