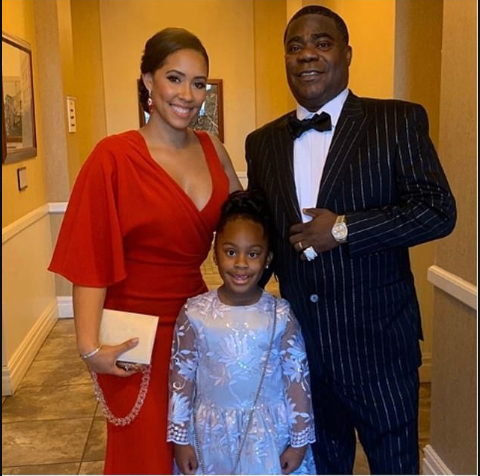 Tracy Morgan and his estranged wife Megan Wollover split in July after almost five years of marriage.  The 51-year-old comedian and his former spouse, 33, are reportedly fighting over custody of their seven-year-old daughter, Maven Sonae. According documents seen by Page Six, Megan wants sole legal and physical custody of the child, she stated in her divorce filing. But Morgan then filed his response requesting joint legal and shared residential custody of their daughter. The site also claimed that in the court papers, 'she made it clear she wants the prenuptial agreement put forth which states that she is obligated to alimony payments as well as child support for their daughter.' Paying for her legal fees was also mentioned in the documents, it was claimed.  The prenup was signed on August 5, 2015.  Tracy and Megan who both got engaged on the Emmys red carpet in September 2012, tied the knot in August 2015. They welcomed their daughter, Maven Sonae in 2013.  The actor-comedian is also dad to adult sons Gitrid, 34, Malcom, 32, and Tracy Jr., 28, whom he shares with ex-wife Sabina Morgan. . Tracy Morgan and his estranged wife Megan Wollover fight over custody of their 7-year-old daughter Follow Linda Ikeji Blog.