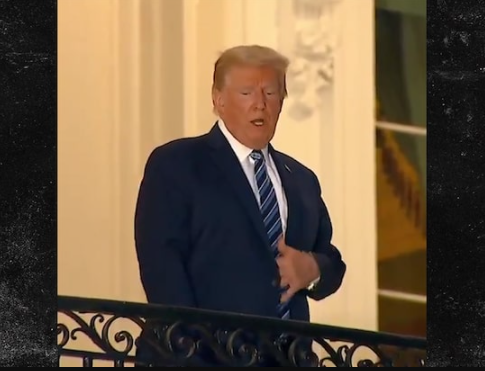 Donald Trump is back at the White House after spending just three days in the Walter Reed Medical Center following COVID-19 diagnosis.

Recall the president announced last Friday that he and first lady Melania Trump tested positive for Coronavirus after Hope Hicks, one of his closest senior advisers was diagnosed with the virus.

On Monday night, the president, 74, arrived at the White House and immediately took off his mask before doing a photo opp at the balcony to salute the Marine One helicopter as it departed.

As he stood at the balcony, Trump appeared to be struggling to breathe and looking like he was in pain.

Shortly afterwards, he posted a video on his Twitter urging Americans to not be afraid of Coronavirus.

However, many on Twitter have raised concerns over the current state of the President as they believe his condition is worse than he wants the public to believe.

“Trump looks like he is gasping for air,” Twitter user @brenonade wrote with a clip. In another tweet, he wrote, “Trump appears to be wincing in pain while he breathes.”

Someone on Twitter replied, “When I had Covid and walked up stairs I felt like I was going to die. He is definitely gasping for breath. And trying to hold in a cough which will make the breathing worse.”

A doctor replied, “That’s what we call increased work of breathing in the ICU (notice heaving chest movement). When I was a soldier in the Army, we called that sucking air. Dude is going to collapse in short order.”