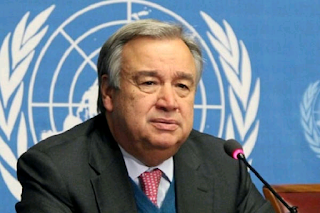 The United Nations Tuesday announced that the world’s population had hit eight billion. It, however, urged countries to improve access to public healthcare to lower the risk of death and increased life expectancy.

UN Secretary-General António Guterres noted that though this represents a success story for humanity, it raises concerns about links between population growth, poverty, climate change and the achievement of the Sustainable Development Goals.

“Unless we bridge the yawning chasm between the global haves and have-nots, we’re setting ourselves up for an 8-billion-strong world filled with tensions and mistrust, crisis and conflict.”

He said the world’s population would continue to grow to around 10.4 billion in the 2080’s with the overall rate of growth slowing down. “At the same time, population growth has become increasingly concentrated among the world’s poorest countries, most of which are in sub-Saharan Africa.

“Against this backdrop, the global community must ensure that all countries, regardless of whether their populations are growing or shrinking, are equipped to provide a good quality of life for their populations and can lift up and empower their most marginalised people.”

According to him, rapid population growth makes eradicating poverty, combating hunger and malnutrition, and increasing the coverage of health and education systems more difficult, but achieving the SDGs, especially those related to health, education and gender equality, would contribute to slowing global population growth.

He said despite its huge size, Nigeria’s population remained its greatest asset in the development process and a veritable tool for the realization of the country’s demographic dividend.